Time to enter the physical world. 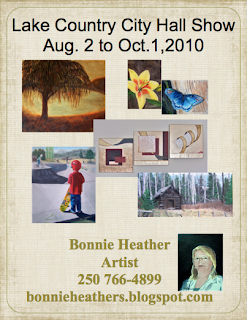 This past year was my year to experiment and have fun. I consider Art Shows a lot of fun but I'm talking about my painting. I'd been painting landscapes for a couple years but this past year I tried portraits, abstracts and figurative. I also worked at creating a better web presence.  What a rewarding year it has been.

The year is almost over and it's time to start displaying my art again.  My experiments mostly turned out and I'm ready to put some of them out in the physical world.  I've developed lots more confidence due to the wonderful comments made on my blog since January.  Thanks everyone.

I have three shows confirmed and two pending.  All but one is/was juried.  I'd love to enter more juried competitions but they are hard on the budget especially if shipping is involved.  So for now I'm excited about the ones I have been accepted in.

Tomorrow will bring some refusals and more opportunities I'm sure, but for today I will happily prepare the thirteen paintings that go on display in City Hall on Tuesday.  I leave on my trip right afterwards.

Oh, how I enjoy summer.  I love wearing summer clothes and the smell of barbecue.  Listening to the birds through my open windows is such a treat and trying to avoid the stones when I go for a dip in the lake are some of my favourite things.

Painting outside is soooo nice.  I'm not a plein air artist but I do enjoy taking my paints out on the deck to work on my present project.  Warm breezes, birds singing and the knowledge that I'm truly blessed.  It can't get much better.

All that said, you might be wondering where the picture of my next painting is.  I don't have one.  I know what I'll be painting next.  It's a sweet picture of a little boy feeding the pigeons.  I've been preparing my board and figuring out how I'll position the elements but I haven't started the painting.  Trouble is our holidays are fast approaching and we have a trip planned and I won't be able to paint while on the road.  It should be a great trip to attend the wedding of a niece I haven't met... but I'll miss my paints.

Wouldn't it be great?!

Wouldn't it be great to visit our blogging buddies? We could travel all over the world, share a coffee while looking at their wonderful art or just listen to their stories. It was Myra's idea but JanettMarie and I liked it.

I could stay in Myra's shed and look at the stars, wander down to the local pub with Ralph, listen to Sherry play her bowed psaltery and have a nice glass of ice water with JanettMarie while looking at her martini's. I could probably go to church with Carol, and have chai with Padmaja. The list of wonderful places and experiences go on and on.  Little did I know that when I started this blogging adventure a few months ago that I would end up with so many friends in so many places.  I am soooo blessed!
13 comments:

I was juried in. Hope you can come. Artwalk :: home

Oh, I do love warm weather.  The decision is always to get out and enjoy it or to stay in and accomplish the many things that need to be done indoors.  Right now the indoor chores are winning but I do take wonderful coffee breaks out on my deck about every two hours.  Such a delightful luxury on my days off from work.

I tweaked my little boy painting but instead of posting it again, I just replaced the one two postings back.  If you're interested, scroll down to July 6th.  I'm thinking of calling it:  "I think I can...  I think I can..." .  I'd love to hear your ideas and or opinion.    Today's job is to refinish a frame for it.  I have this big antique frame that's solid oak.  It will be a challenge to refinish it without ruining the raised design on the wood but well worth it if I succeed.  I'll keep you posted on how it turns out.

Until next time, have a great day.
BH

I have a burnt nose.

It's been a week since the last post!  Wow, does time ever slip away on me.  Looking back and trying to analyze where it went, I realize there was a lot accomplished.

I went canoeing twice and even have a burnt nose as a souvenir.  We visited with friends and had others over to visit.  There was an apartment building fire in Kelowna and we had the opportunity to help those evacuated.  There was another fire a couple days later that challenged our firefighters but we didn't get called out for this one. For those who don't know, I'm not a fire fighter, but volunteer for our Emergency Service group. We help those evacuated, with the forms needed to get the three days of lodging and food offered by the Provincial Government if they are forced out of their homes.  It's very rewarding.

I know, I said I was finished my painting a week ago...but... well you know how it is.  It's still on my easel. I had it critiqued by David M, whose painting and digital art I greatly admire and I took a day to listen to the videos on mastering color by Richard Robinson.  After that I knew I needed to do some more work.  I'll post it one more time when I get finished again.

Hoping you have a great week,
Bonnie Heather

Only the name left to do. 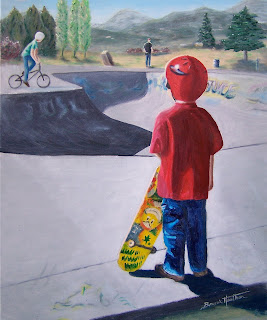 "I think I can... I think I can..."
24"h x 20"w
oil on stretched canvas
It's time to quit. I think?  A bit more drying and it's ready for the frame.  This painting, like the family portrait I'm working on, have both challenged my ability.  They are both finished as far as I can go but I dream of becoming better at the craft of painting.  I've learned a lot during the last couple of weeks and for that I'm grateful but there's so much to learn and so little time.

The comments made during this project have given me lots of wonderful ideas for a name, but I haven't quite nailed it.  I'll let you know what I come up with.

In the meantime, I hope you, my dear blogging buddies, have a great week.

ps.(days later) instead of reposting this picture again I just added the new name.  What do you think? 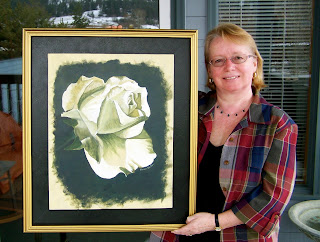 Picture from a couple years ago when it was called:
"A Rose of a Different Colour"

Hi everyone.  I think this is the longest I've ever gone without posting.  Yesterday I started a week long staycation.  I slept in 'til 9:30, read a novel, painted a little and delivered a donated painting for the new seniors home nearby.  It was kinda fun putting a little gold plaque on the painting with it's name followed by mine.

I actually changed the name of the painting before donating it.  Since I painted it a few years ago, I've called it "A Rose of a Different Colour" but for this new and final home I renamed it "Essence".  It has held an honoured position in my living room, but as one of my favourites I knew it was time to pass it on for others to see.  I really hope it brings some joy to the people living at the Blue Heron Villa.

Bonnie Heather
Kelowna, British Columbia, Canada
I'm taking a break from my blog for a while but hope to come back soon.

Buy originals, giclees or cards: (click below) or email me directly.